Hospitals and healthcare facilities are among the most important places to have the very best levels of indoor air quality. As part of a continuous process of monitoring, annual third-party microbial testing revealed that one AHU in a local healthcare facility had levels of bacteria that exceeded acceptable levels. Despite regular manual cleaning, the problem had not been eliminated, leading the estates team to look for alternatives.

The client was familiar with ultraviolet C band light (UVC) systems for water disinfection, but they were unaware of the benefits of UVC positioned in close proximity to the cooling coil and drain pan in HVAC systems. They decided to trial UVC treatment for two months, and as part of the project Gibbons were employed to undertake coil surface sampling, air testing and a careful survey of the AHU to determine the feasibility of installing a UVC disinfection system.

The UVC system was installed in a cooling coil within an AHU. After 60 days, testing confirmed that bacterial levels had been reduced below acceptable limits. Mould growth was virtually eliminated. This was demonstrated by independent third-party testing and local petri dish sampling (below).

The ultraviolet system now works continuously in the background to keep the cooling coil and drain pan spotless without any manual cleaning. 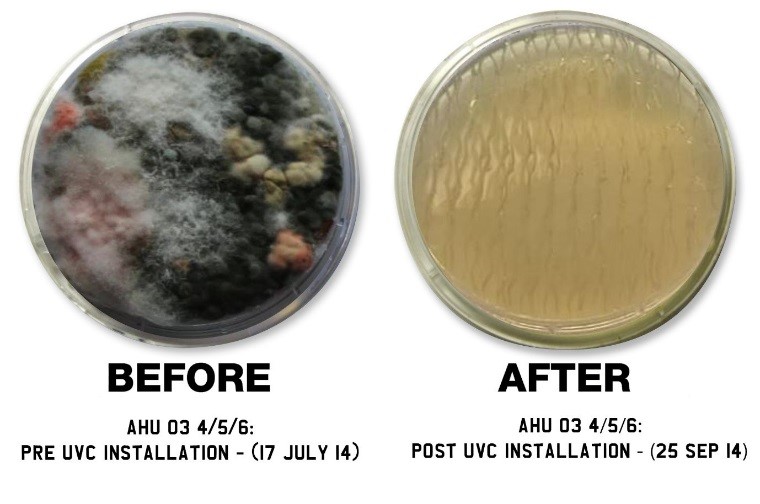