When a national building contractor working on a new £25 million college development identified an unpleasant problem with a recently-constructed property, they called in Gibbons Ultraviolet Solutions.

A constant, offensive odour within one of the buildings was reported, which the Gibbons team recognised as so-called ‘dirty sock syndrome’ being harboured by the HVAC system.

Our client had undertaken some initial sampling through the HVAC equipment and undertaken what they believed to be a full system clean. The samples taken pointed to a bacterial issue within the system (chemical and organic contaminants such as viruses, fungi and mould can often be the cause of HVAC system odours). The problem remained for several months until the client contacted Gibbons Ultraviolet Solutions.

Pre-work tests were carried out by the Gibbons team, looking specifically at the AHU cooling coil. Samples were taken as cultures and showed a mould growth, highlighting the need for some disinfection of the cooling coil and surrounding area. The pressure drop across the cooling coil was also recorded.

Ultraviolet-C (UVC) light has been successfully used for many years to control bacteria in a range of applications by breaking down the DNA of viruses, mould and microorganisms. For this project, Gibbons specified its CoilCare® system to dose the cooling coil surface, with the UVC light reflecting all the way through the coil, cleaning and disinfecting its entire surface. Unlike traditional cleaning regimes, the Gibbons technique provides permanent 24/7 cleaning which kills germs on the coil surface and, to some degree, within the airstream.

The client reported that the odour issue had been resolved, so after just 60 days of operation our engineers returned to site and resampled the coil. There was no growth on the sample, indicating the UVC had successfully eradicated the odour and disinfected the cooling coil surface. 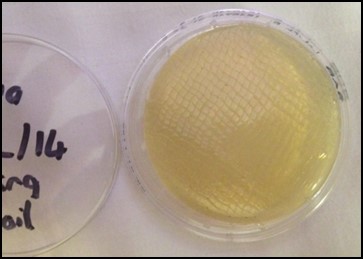